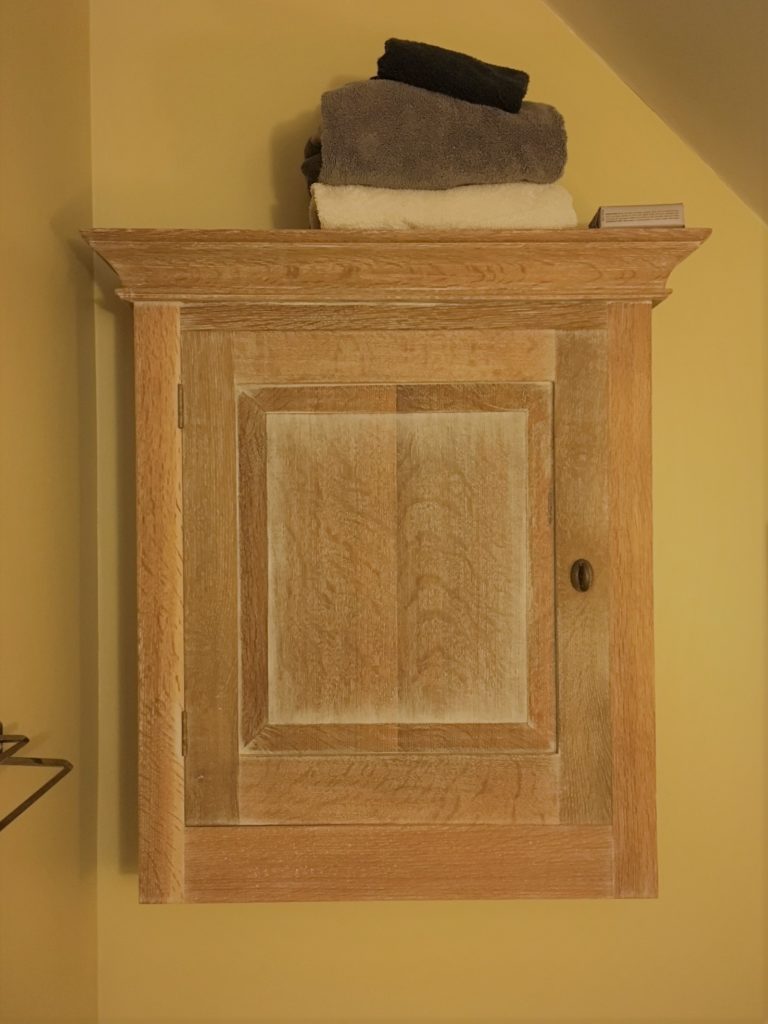 A simple cabinet with solid brass butt hinges. (The door does fit perfectly, though it appears not to here, as it’s slightly ajar.)

Butt hinges were widely used for inset doors in early-20th-century furniture and built-ins. They are available in a variety of styles, types, and sizes to suit many different applications.

In the English shops where I worked in the 1980s, we always used plain unswaged hinges; we knew them as solid-drawn brass butts. These have a fixed pin and are not adjustable (except by means of various old-timer tricks; I’ll reveal these in a future post); as a result, they’re less handy than loose-pin hinges for hanging large doors. Still, they are ideal for most furniture and cabinets. A well-made hinge with a fixed pin has virtually no play and is a dream to open and close.

Oddly, the practice in those English shops where I worked was to mortise the hinge only into the door stile, not the cabinet — a method that saves labor but is arguably less durable, especially for heavy doors, because the entire weight of the door is borne by the screws. Contrast this with cases in which the hinge is mortised partly into the door frame and partly into the cabinet, where the bottom ledge of the mortise helps to support the door’s weight. Most American examples I’ve seen use this method, so it’s the method I will outline here using plain butt hinges from Paxton Hardware. 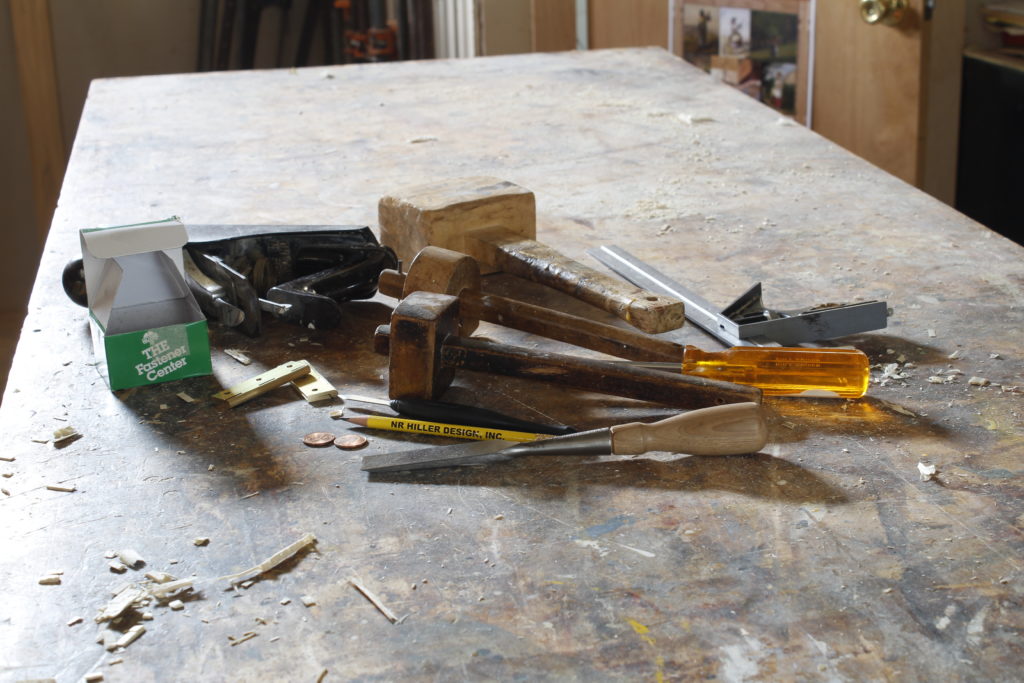 Tools you will need: A handplane for fitting the door, chisel, mallet, pair of marking gauges, marking knife, temporary screws and screwdriver, square, pencil, drill and Vix bit, and a couple of coins for shimming

1. Lay out the hinge position

For early-20th-century frame and panel doors, I use the rail-to-stile intersection as a guide. In this case I extended the rail position across the stile with a square, then measured 5/8″ in (i.e. up or down from the bottom or top, respectively). This point became the outer vertical location of each hinge. 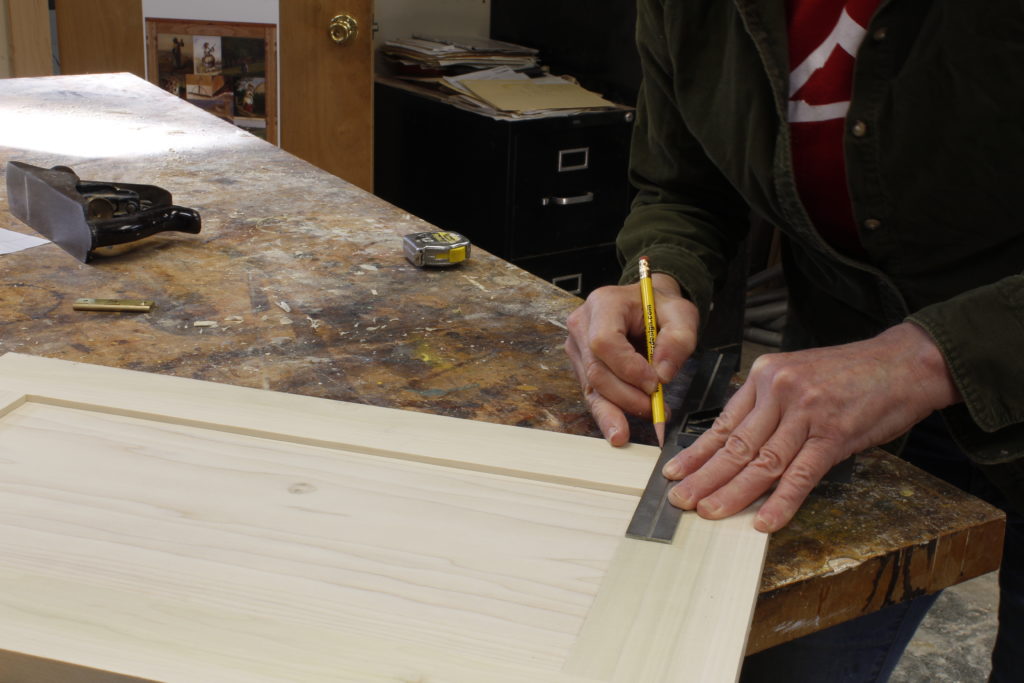 Square the vertical starting lines you determined in step 1 around the edge of the hinge stile. 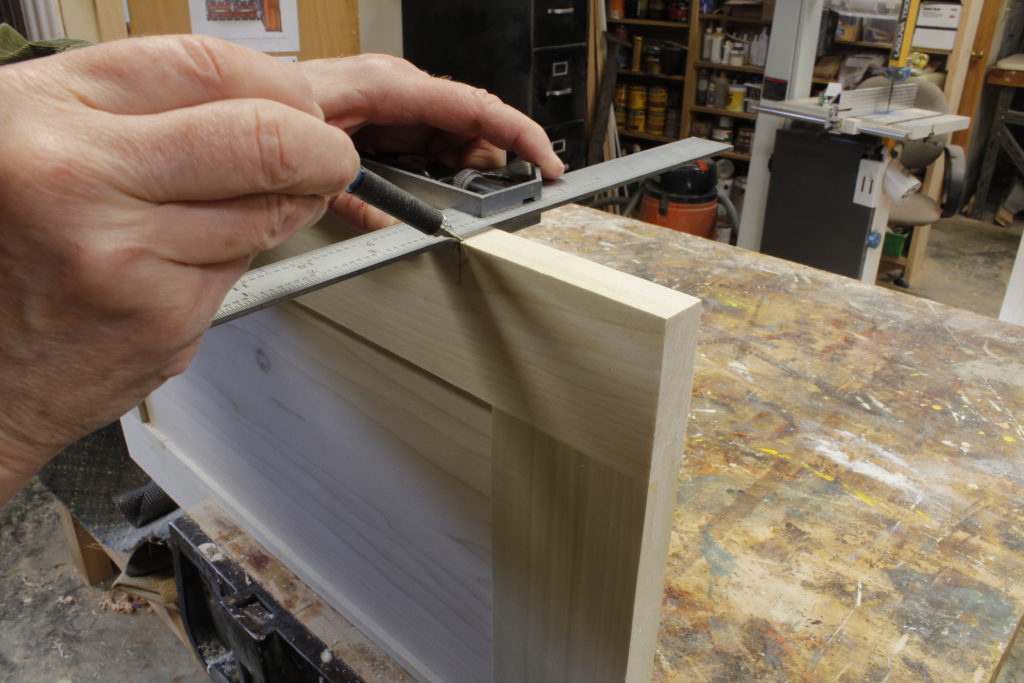 3. Now mark the inner end of the hinge

Lay the hinge in place with its outer end just touching the first location line you made (in step 2 above) and mark the other end with a knife. 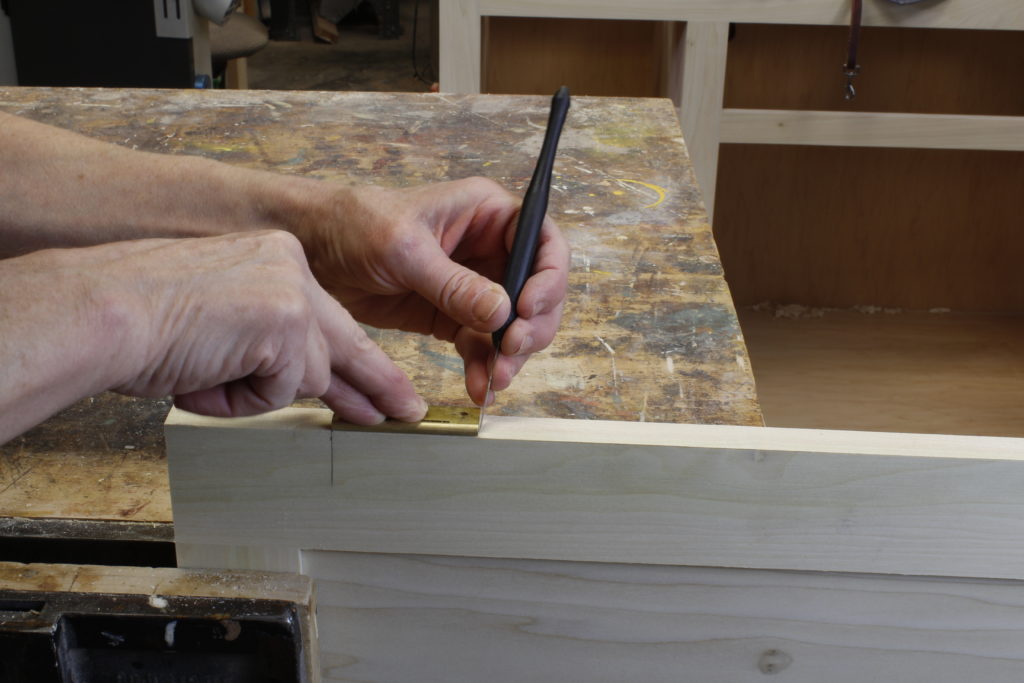 After you have marked both ends of each hinge, square the line around to the front. (In the illustration immediately above, you can see this line at the left end of the door.) When I had marked the position of the lower end with the knife, as shown above, I extended it onto the face of the stile in pencil. You could use a knife to make the mark on the face, but at this stage you still don’t know the precise point at which the mark will need to end; making it in pencil allows you to remove any excess later.

It’s handiest to use two marking gauges when laying out mortises for butt hinges: one for the depth, the other for the thickness. In this case, “depth” refers to the distance from the center of the hinge’s pin (the metal dowel in the center of the barrel) to the outside of each leaf, or flap. 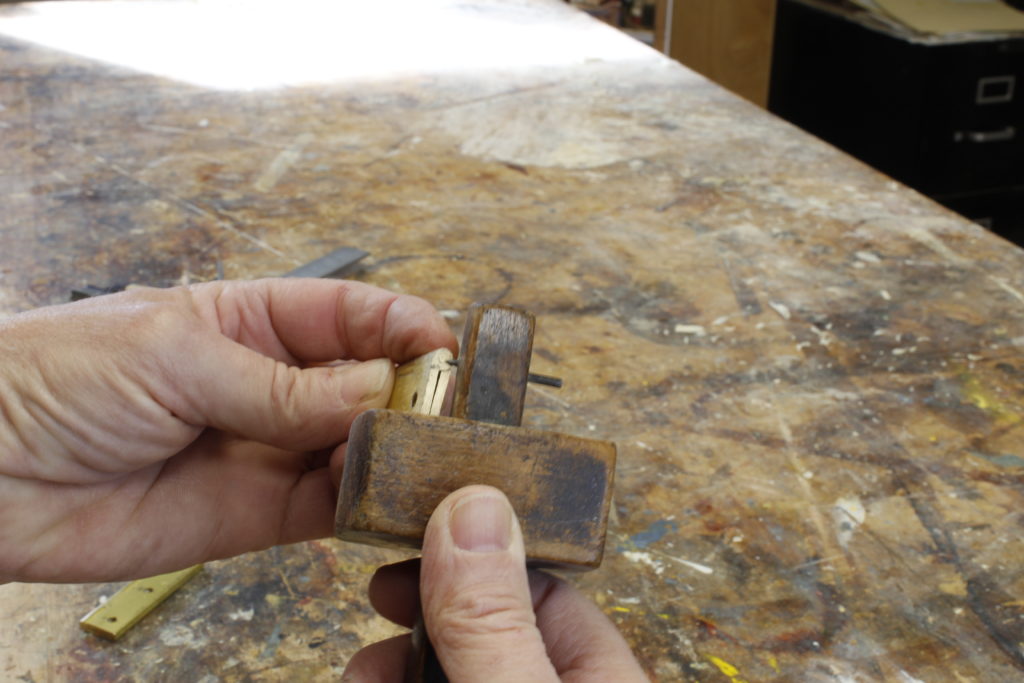 Hold the marking gauge’s fence against the outside of the leaf and set it so the marking pin hits the center of the hinge pin.

Now use the marking gauge to scribe this depth onto the edge of the hinge stile, staying within the outside lines you marked in step 2 above. 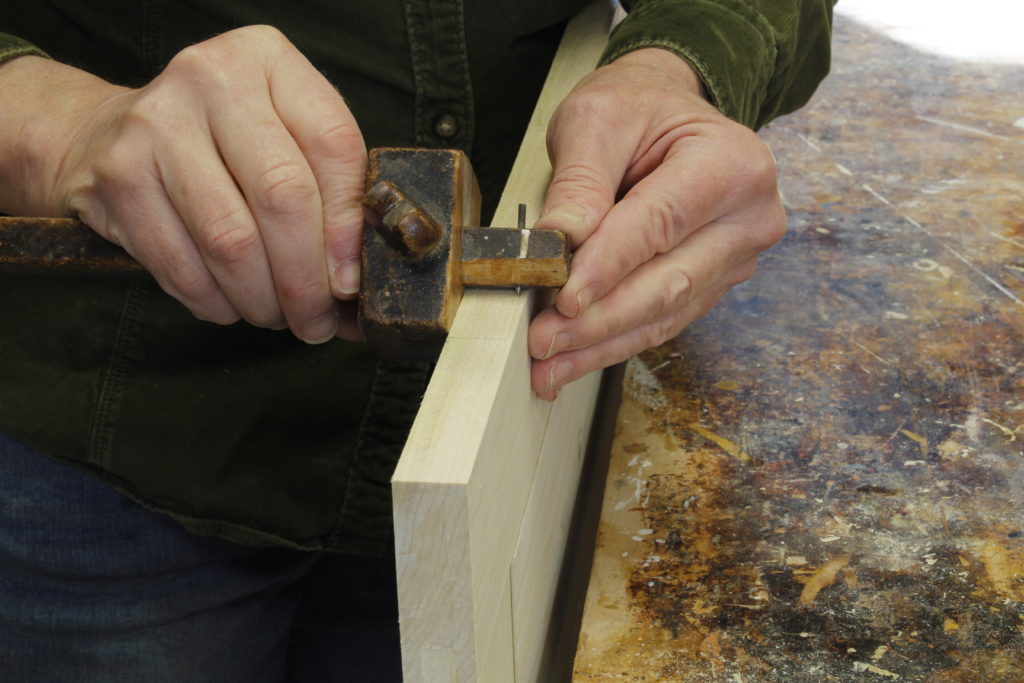 At this stage the layout should look like this: 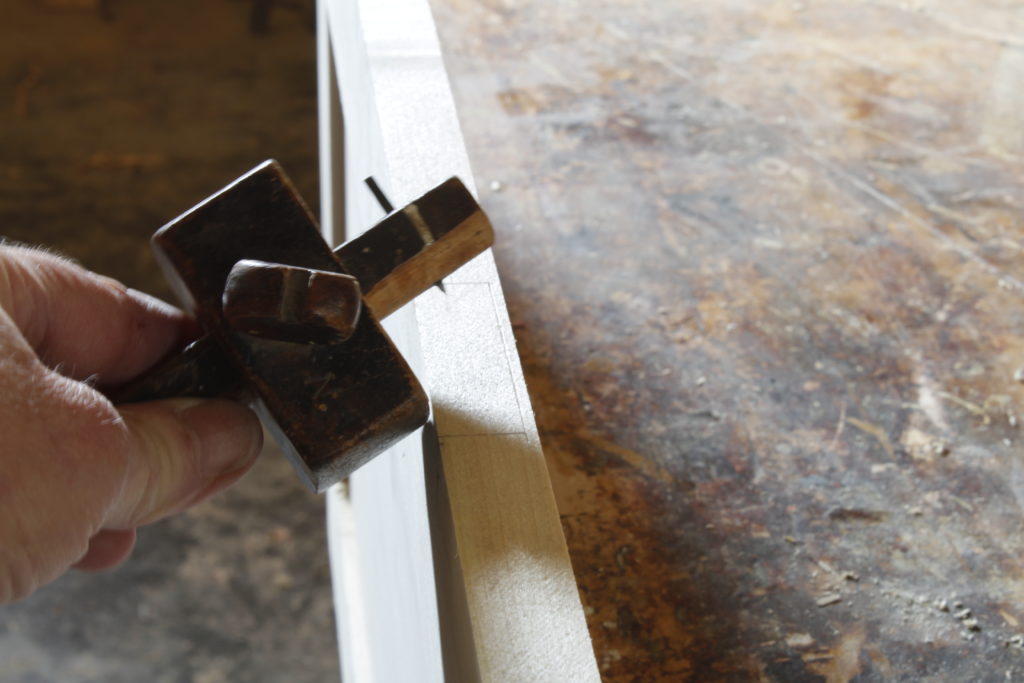 In applications where the hinge is mortised partly into the door and partly into the cabinet, each mortise needs to be about half the thickness of the hinge’s barrel. I say “about half” because if you were to mortise the entire thickness of the barrel, you wouldn’t be able to open the door; it would be hinge bound, to use the carpenter’s term of art. In order for the door to open, there must be a little bit of a gap, sometimes called a margin, between the hinge stile of the door and the side of the cabinet. Ideally you will keep this margin consistent around all the other edges of the door.

The width of this margin should take into account the style in which you are working and the thickness of any finish film you plan to apply. Paint finishes should have a little more of a margin than those with a thinner film, such as shellac and wax. 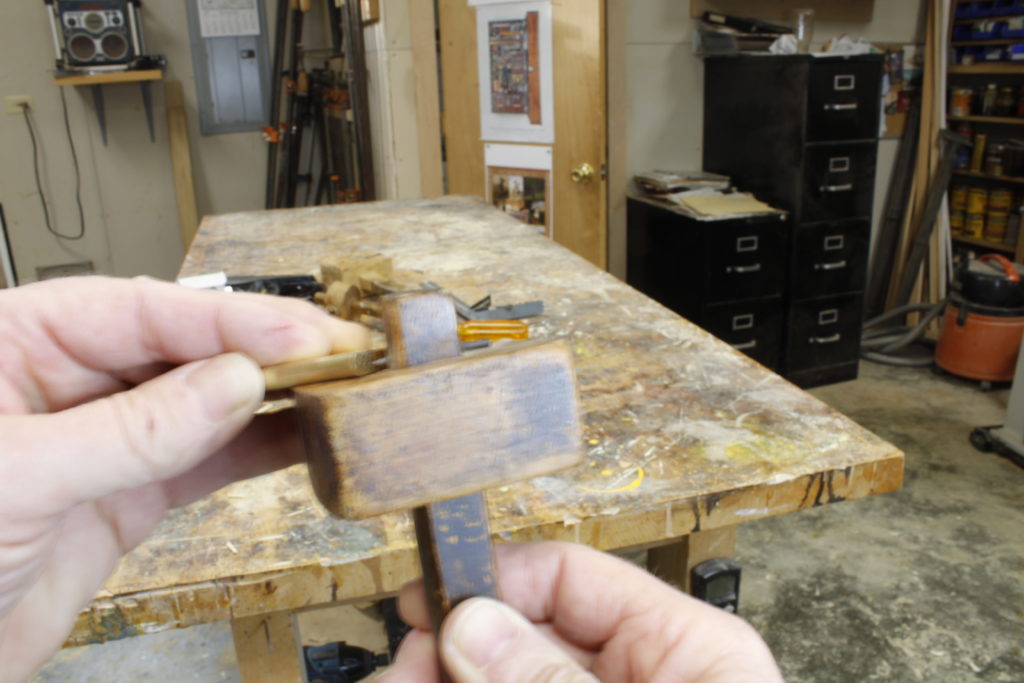 My apologies for the out of focus image. No matter how short I made the exposure, I could not get it short enough to compensate for the movement of my hands.

Now scribe the half-hinge thickness (as qualified above) onto the door stile, staying within the end marks. 6. Scribe the end points of the hinge on the face of the door

Now that you’ve marked the thickness of the hinge leaf on the door stile, you can scribe the end points with a knife, going down to the gauge line. 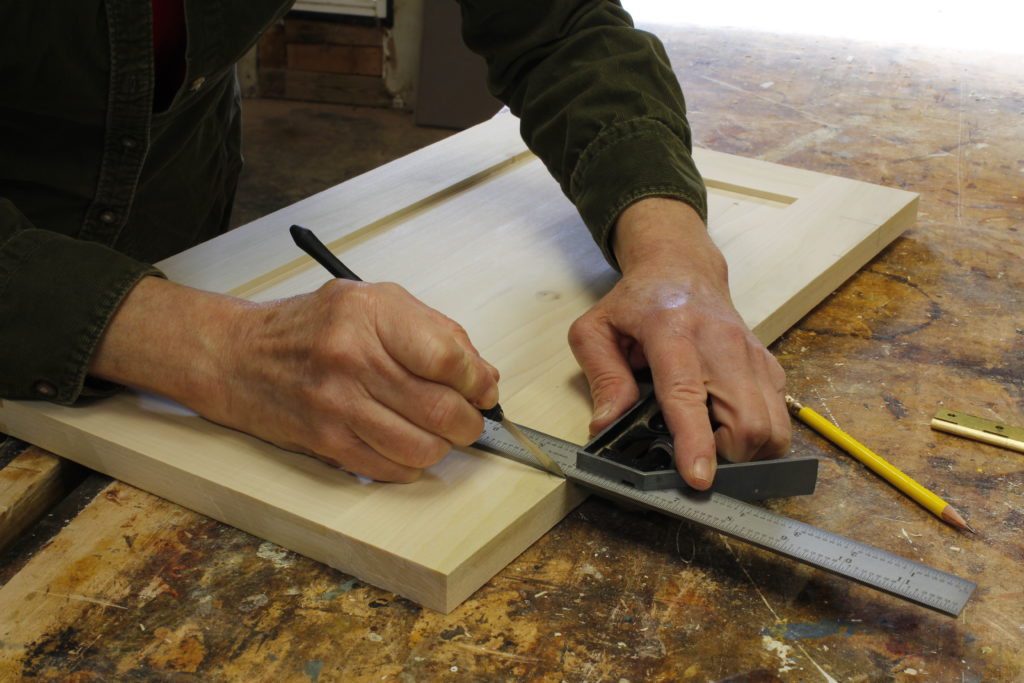 Now you’re ready to chop. Start with a series of lines across the grain. Stay a little bit away from each end at this point; if you try to chop all the way to the ends, you’ll compress the wood and end up with a mortise that’s too big. Chop briskly enough to cut most of the way to your bottom line but not so hard as to go beyond it. The point here is to break the grain so that you can remove the bulk of the wood without tearing beyond the mortise’s ends. 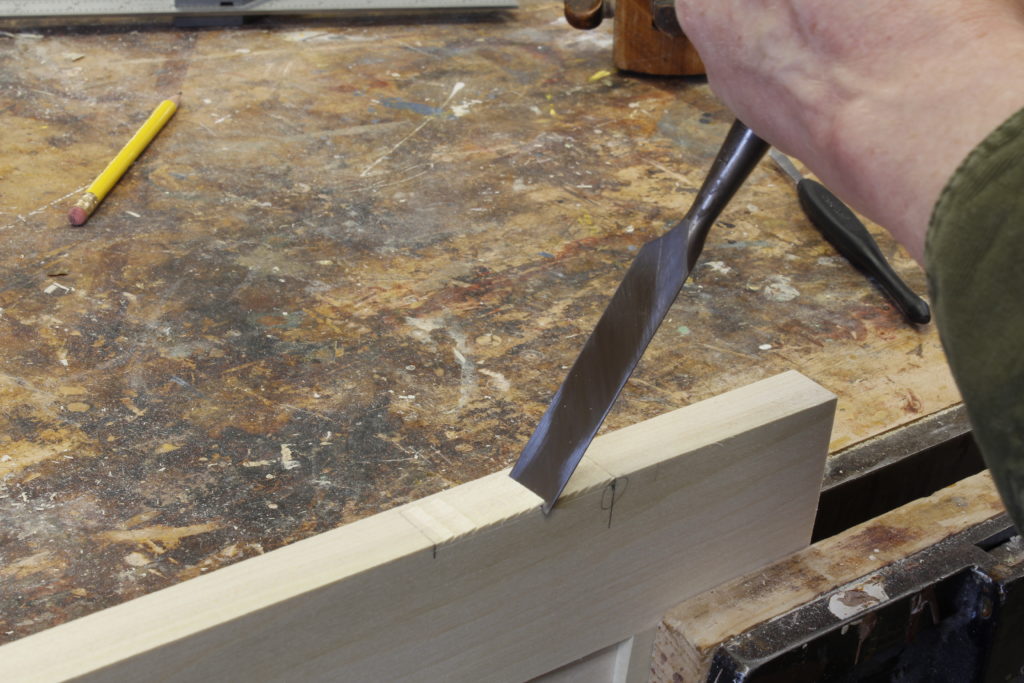 When you have completed the series of initial chops, pare the bulk of the material away carefully, holding your chisel flat side down and guiding it with your secondary hand. Stay clear of the ends, bottom gauge line, and back edge; it’s especially easy to slip and tear out the thin strip of wood at the back of the mortise. 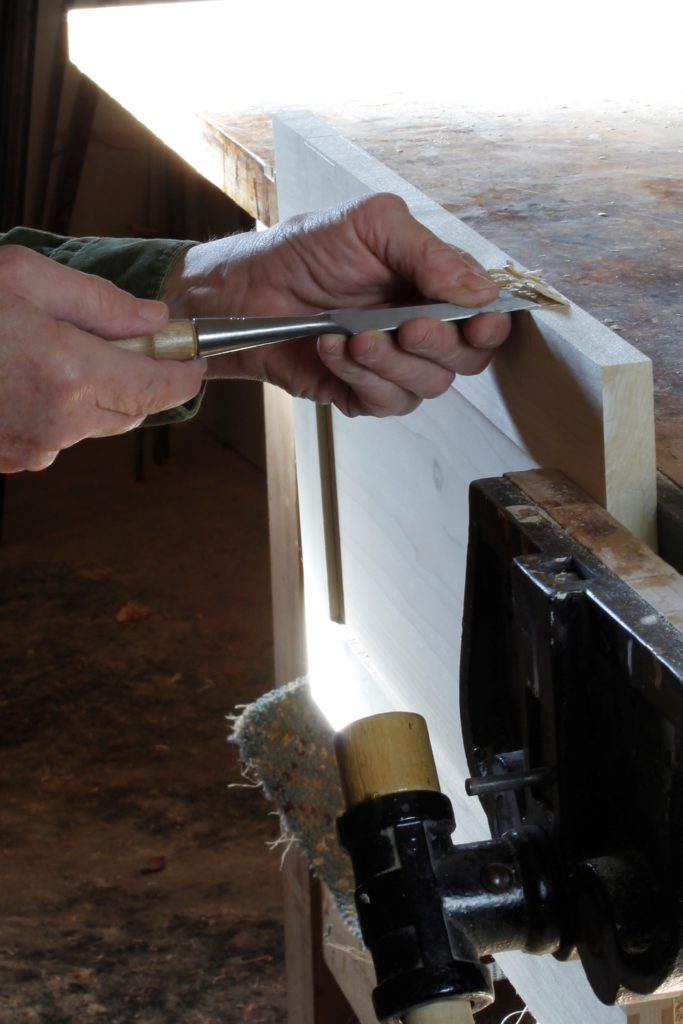 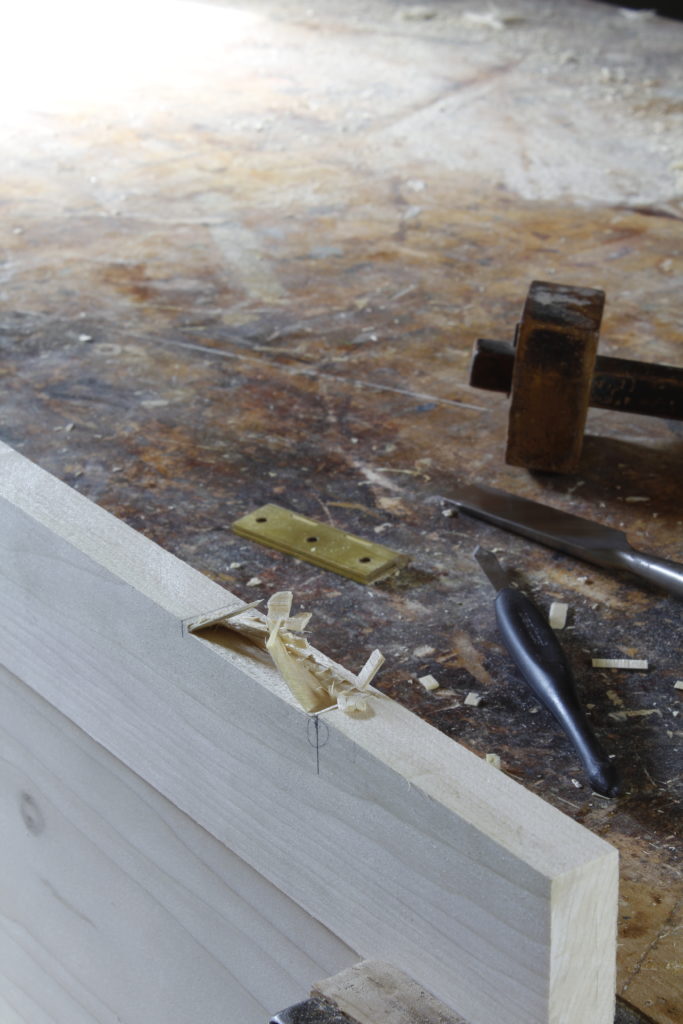 After you’ve removed this waste, pare the ends square, then continue paring the main part of the mortise, this time going down to the bottom of the gauged line. For the final cuts, lay the tip of your chisel in the gauged line on the door stile’s face and gently push it forward to take the last few shavings.

Finally, without using your mallet, hold the chisel vertically with the beveled side toward the inside of the mortise, lay the chisel tip in the scribed line at the back edge of the mortise, and gently pare down to the full depth. Take care to avoid tearing out the thin strip at the back of the door. As you near each end, switch the position of the chisel back to cross-grain and carefully pare down to the base at each corner; this will help you avoid tearing out the grain at the corners.

Test the fit of the hinge. 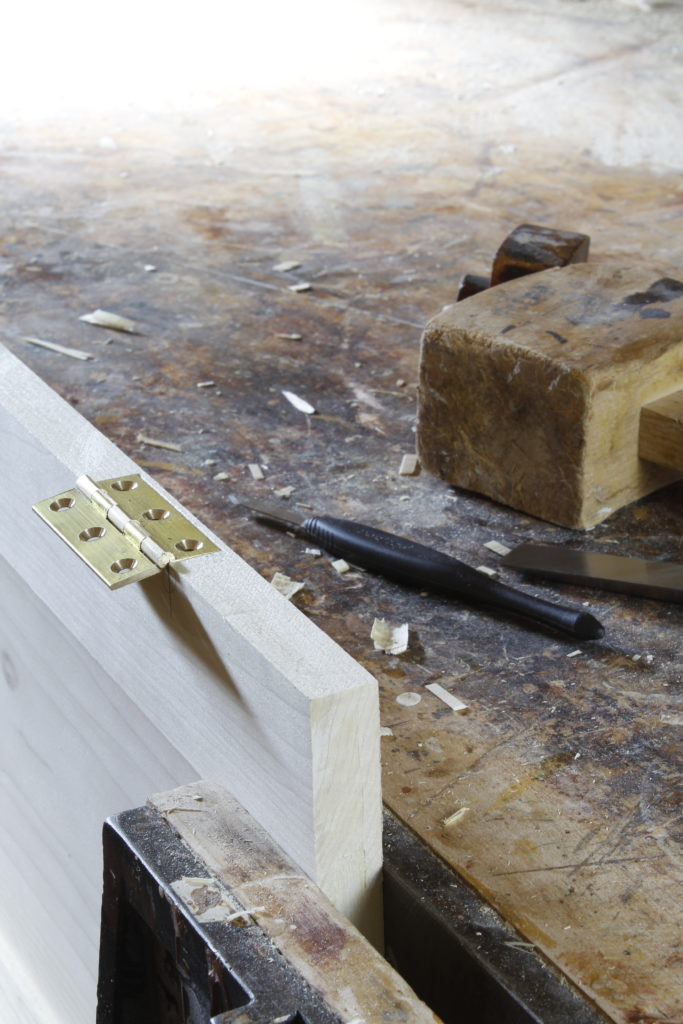 Use a Vix (centering) bit to drill holes for the two outermost holes. Don’t drill the center hole for now; keeping that wood intact will allow you to adjust the hinge position slightly if necessary.

Don’t insert nice brass screws at this stage. Use something quick and sturdy of the same size instead. In this case, I used #6 x 5/8″ Twinfast screws.

10. Lay out the positions of the mortises on the cabinet

Set the door in its opening on top of spacers of appropriate thickness. For this door, which is part of a cabinet that will be painted, I used pennies.

Mark the precise end, top and bottom, of each hinge with a small knife nick in the cabinet. (In this case the cabinet has a face frame, but it makes no difference to the technique whether or not there’s a face frame.) 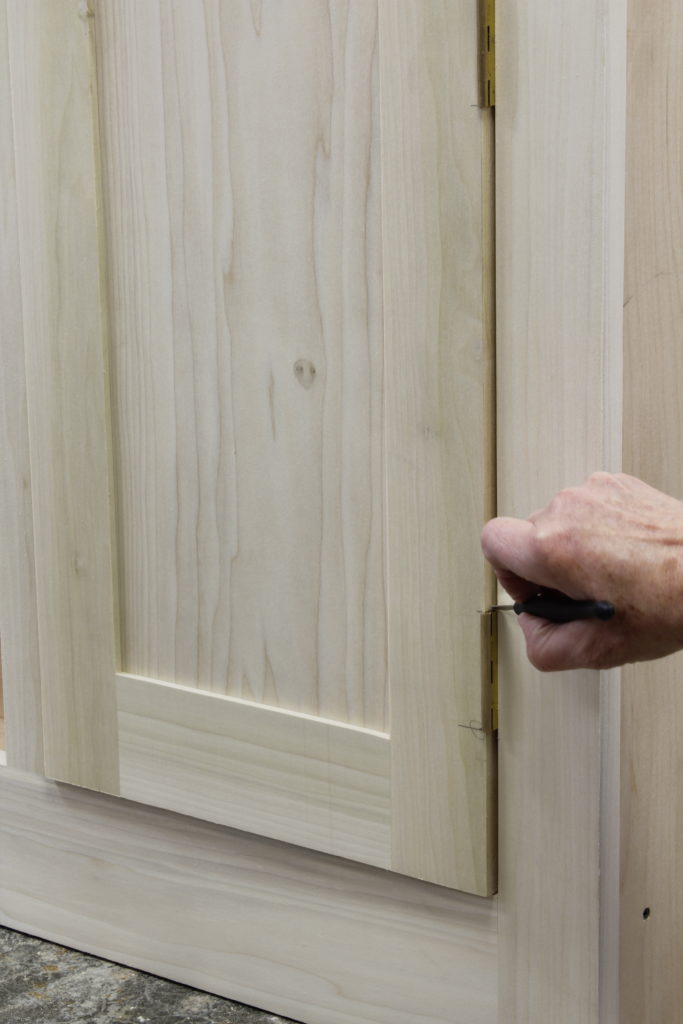 Because the knife marks are hard to see, I like to draw a semicircle around them in pencil to keep me from confusing them with the occasional random scratch. 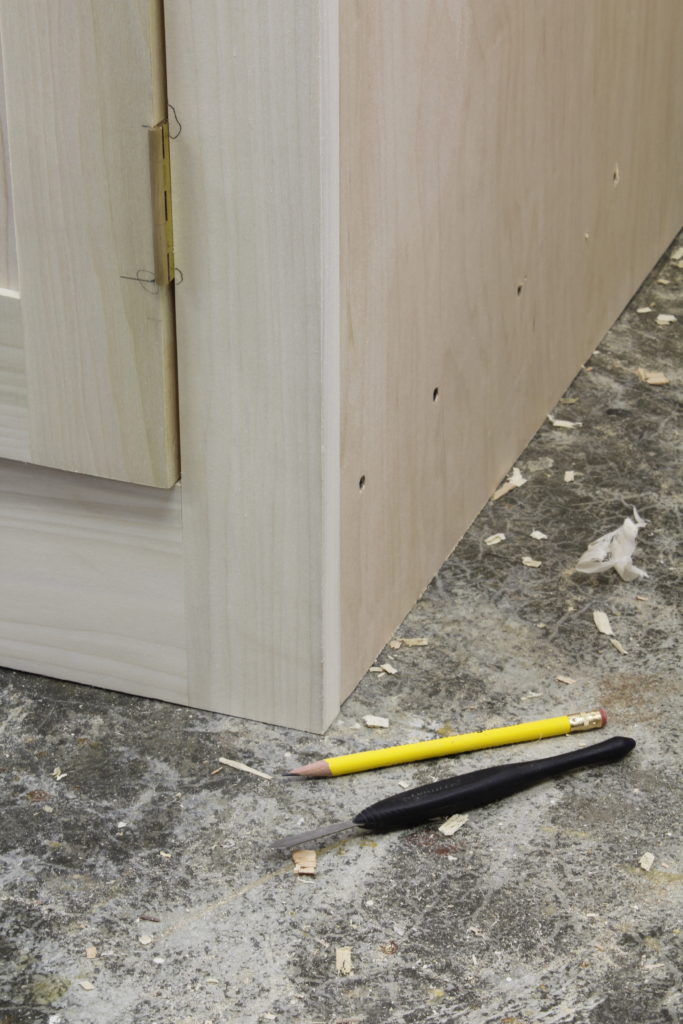 11. Repeat the marking out, chopping, and paring

In an ideal world, we would all be able to lay our cabinet on a workbench for the following steps. Because I work alone and this cabinet is too large and heavy for me to lift safely, I lay it on its side on the floor, protecting its end with a mover’s blanket.

As you did with the mortises in the door stile, extend the marks for the ends of each hinge across the edge of the cabinet interior (or face frame), then square those marks a little way across the face. 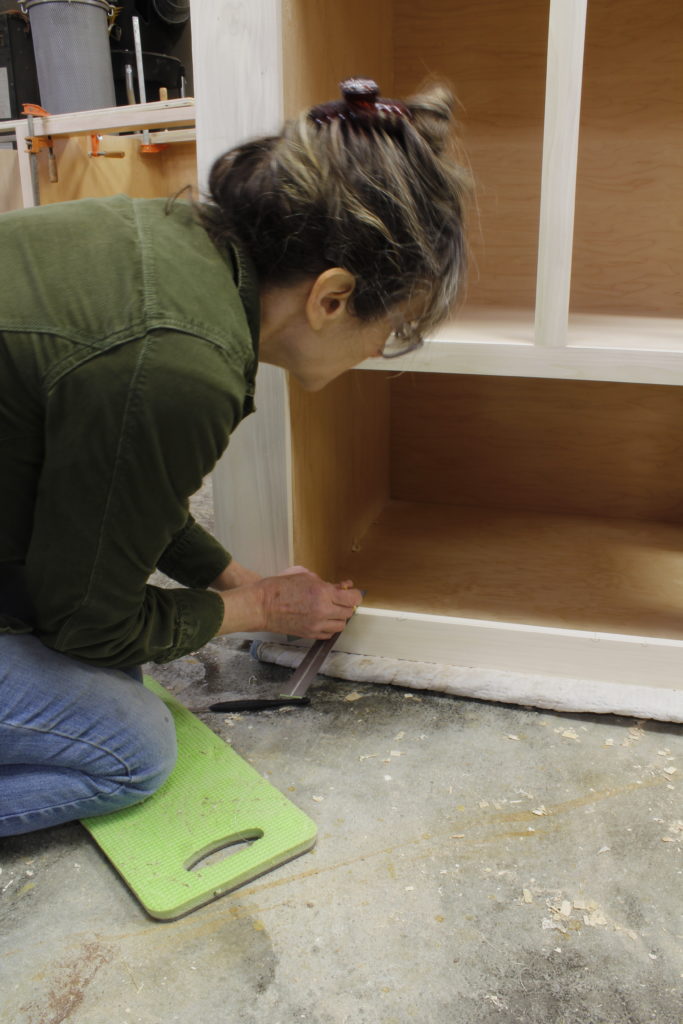 Once you’ve marked the mortises’ ends and scribed the depth and thickness with marking gauges, repeat the chopping and paring as above. 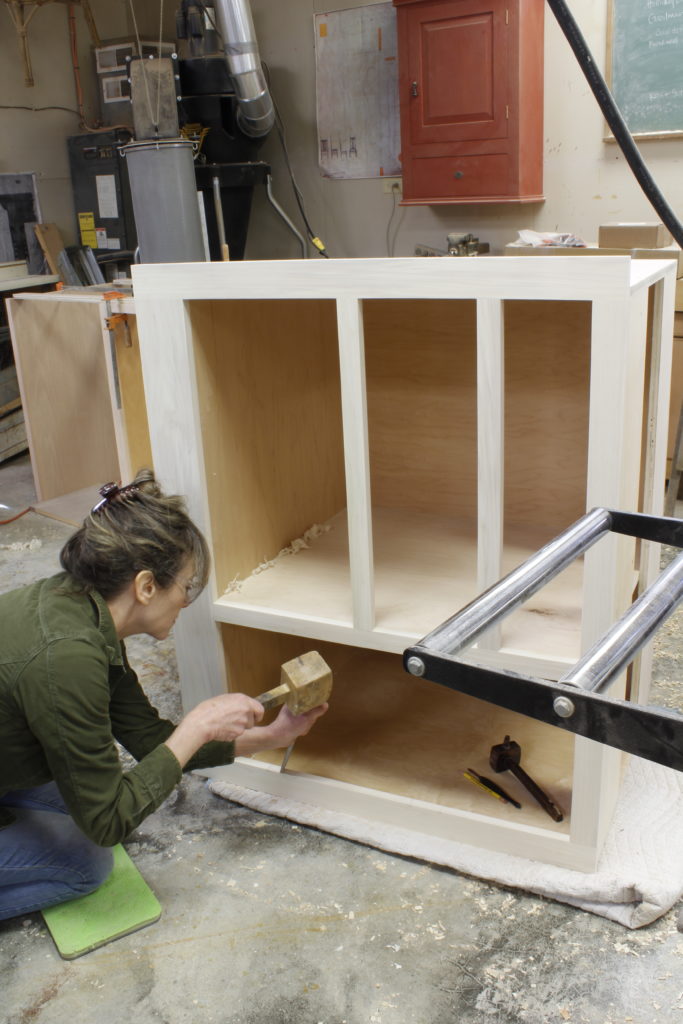 Check the fit and pare away more if necessary. 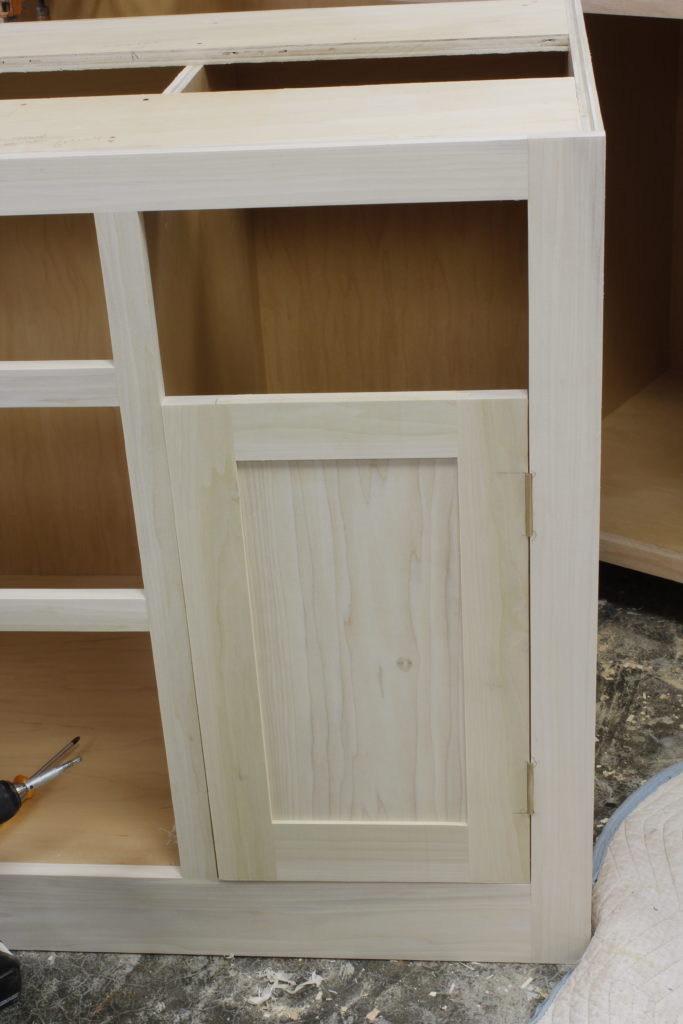 Don’t be tempted to fit the opening edge tight against the cabinet edge or face frame; if you do, the door won’t open. There needs to be at least a small margin. Also keep seasonal movement in mind. If you fit doors too perfectly in midwinter, when relative humidity tends to be low, you may find your door swollen shut the following summer.

In addition to a sensible gap, you should plane a slight bevel on the back of the leading edge to take account of the swinging arc. As a door opens, in effect it gets bigger as its thickness becomes part of the width. (High school geometry: Pythagorean theorem.) 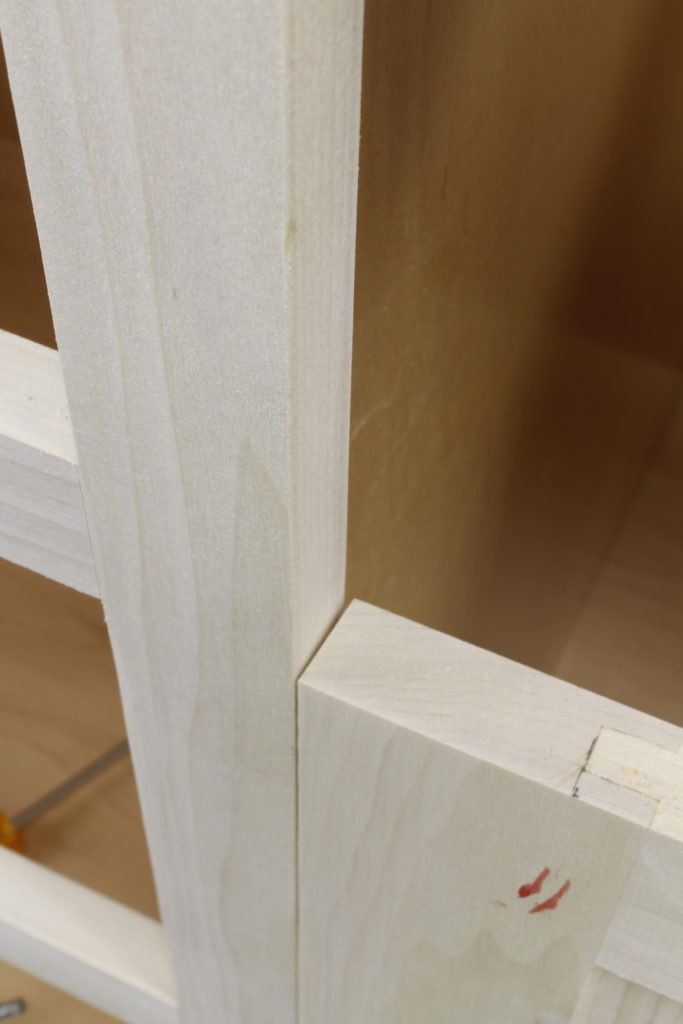 Viewed from above, the leading edge shows a slight bevel. The blood is from a moment’s clumsiness with my nice sharp chisel.

I’ll talk about a couple of other butt hinge installations, as well as several different types of hinges, in upcoming articles in Popular Woodworking Magazine.