Do you want to make a wood robot toy? Or maybe looking for the first woodworking project for kids? Try this one! One morning, while our son was still sleeping, a surprise guest climbed onto his windowsill… The previous day, our son saw us working on this wooden robot toy and even participated in his making, but he hadn’t seen him completed, and of course, couldn’t imagine what he was doing on his windowsill. It was a pleasant surprise! Our boy decided to start their acquaintance by comparing the robot with himself. “Robot’s got a smile. I’ve got a smile.” Then he cuddled with the robot and made him do a crazy jiggly dance. In no time, they were best friends.

While the wooden robot lacks realism or fantastic articulation, he definitely possesses all the charm of a toy made with love. Why else would he be wearing his heart where everyone can see it? The post contains Amazon affiliate links for products we used and liked.

This is sketch of a wooden robot from the notebook that I kept in the months before my son’s birth. I thought it would be a good toy for him to gnaw on. My son is almost two now. Some projects do take a while. Don’t take an example from me! It’s a very simple project to make, whether you want to make a toy for a young kid or want an older kid to have their first woodworking experience (and this articulated wooden robots can be the next step). No special tools or materials are required.

I love using wooden blocks for making new toys. For one thing, you don’t need to have a lot of tools to work with wooden blocks: everything comes already pre-cut. In addition to that, I often see wooden blocks in thrift stores, so it’s easy to replenish our supply for new projects and give some new life to old toys. As a result, we have a pretty good collection of blocks of different sizes and grains.

For the robot, we took two cuboids and four cubes. If you don’t have wooden blocks, but want to cut them from boards, the dimensions of the cubes were 1.5×1.5×1.5″ (like in this set), and the cuboids were 2.5×2.5×1.5″ (they came from this Melissa & Doug set). The combination of light and dark wood in one project always looks exciting, so I also used a 1/4″ scrap of a cherry board for making a panel on the front of the robot. That little front panel was actually the most complicated part of the whole toy robot project.

Making of the Front Panel To make the panel, cut a little 1.25×2″ rectangle. Using a ruler and a pencil, mark six buttons on it. With the help of a miniature miter box, make the straight cuts, then widen them with a needle file. Glue the panel to the body block with wood glue and put a weight on it for a while.

For stamping “1, 2, 3” and “A, B, C” on the buttons, I got to finally use this stamp set I got last Christmas. I seemed to have so many ideas when I received it, but it’s the first project I used it for! I also considered writing or woodburning the numbers.

Making of the Toy Robot Body

If you looked on my original sketch, you’d see that I marked the places where I was going to drill holes. I planned to drill holes right through the blocks, run strings through them,then tie knots at the ends, like in the sketch. When I showed my sketch to my husband, he didn’t seem overly fond of knots and suggested using glue for holding the strings in place instead. I decided to trust him, but you can use either idea.

For assembling the robot, drill the holes, using the right size bit to make a snug fit for your string. One hole in each limb block, one hole in a head block, and two holes at each side of the body block to attach the limbs to. We squeezed polyurethane glue in each hole, then pushed the string in with a nail. Polyurethane glue is ideal for this job: not only because it is strong, but because it expands as it dries, securing the string in the hole.

At first, the eyes were supposed to be just holes, drilled inside of each other, like on the picture. Then we decided to plug the inner holes with dowel cutouts, giving our robot dark brown eyes. He was very pleased!

The smile and the heart were woodburned. If you don’t have a woodburner, you can always draw them with a marker. And the robot is ready!

The final result isn’t an elaborate toy, but it has a few things going on for it! 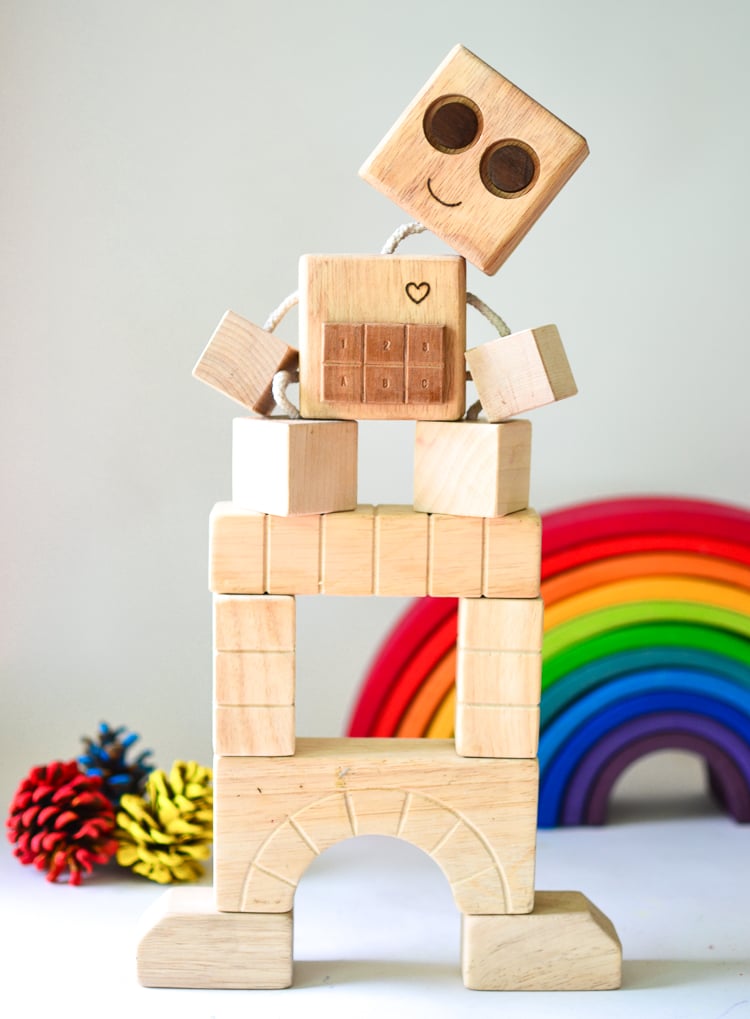 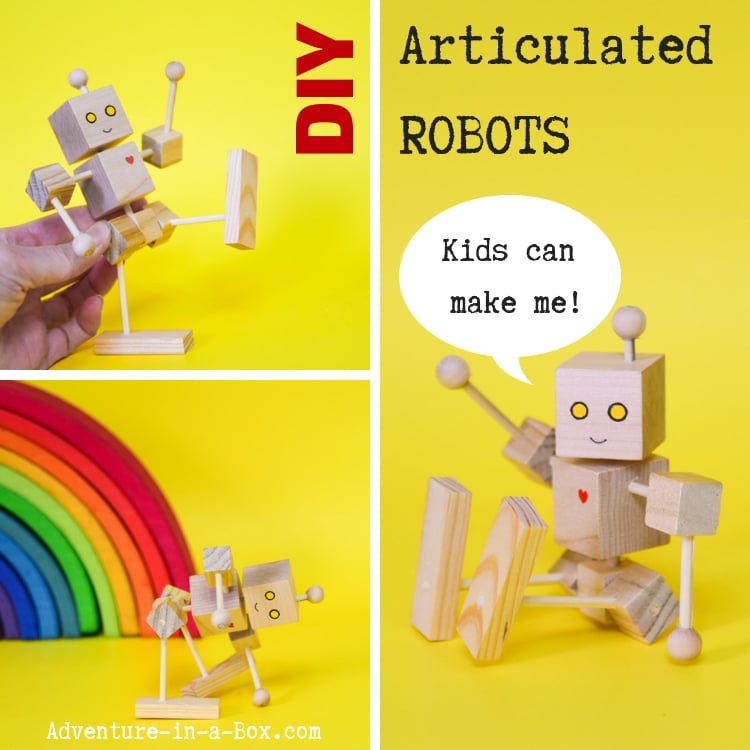 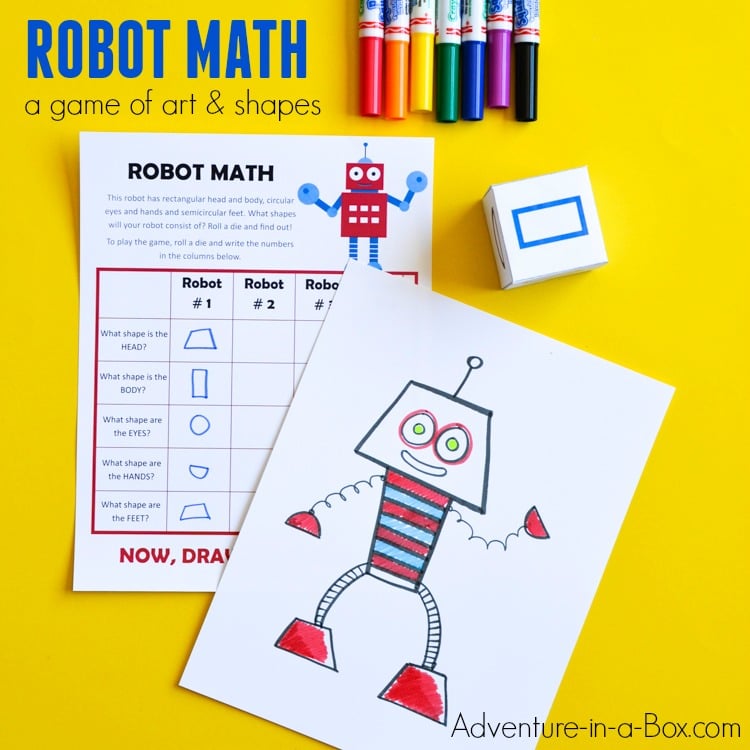 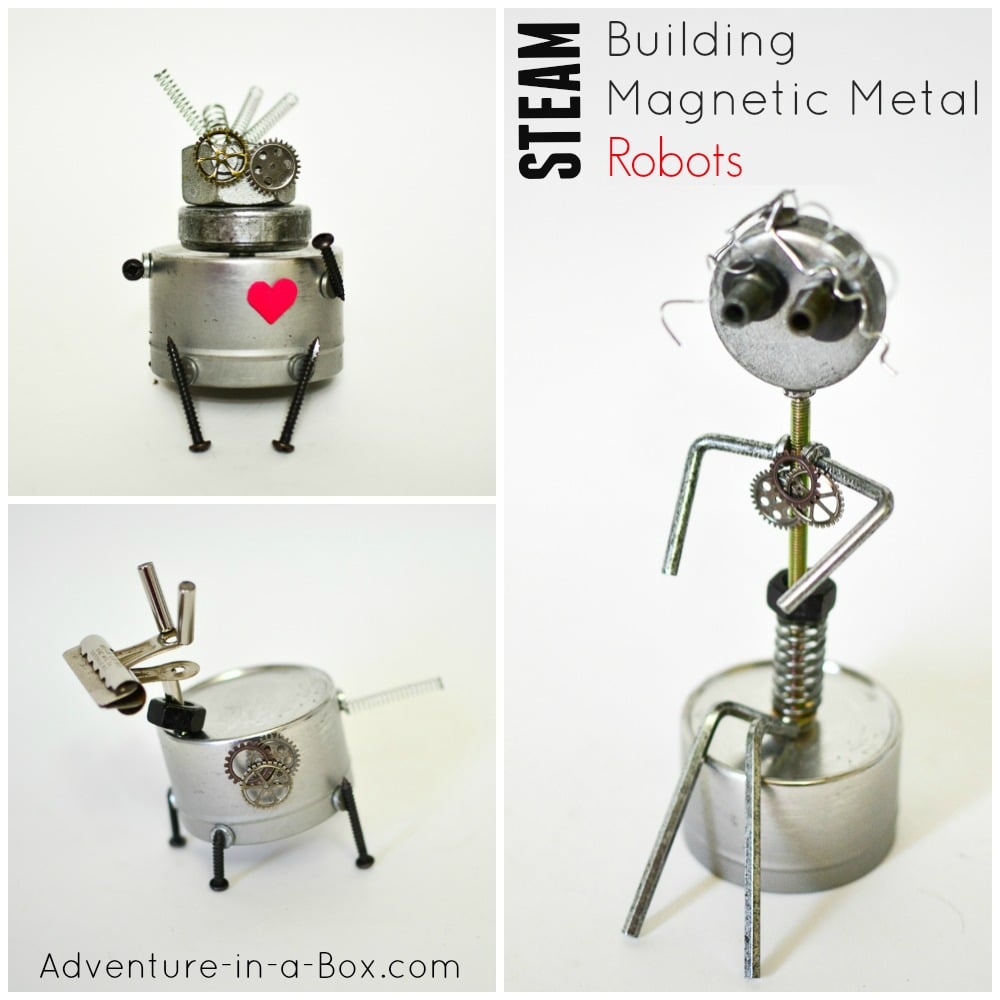 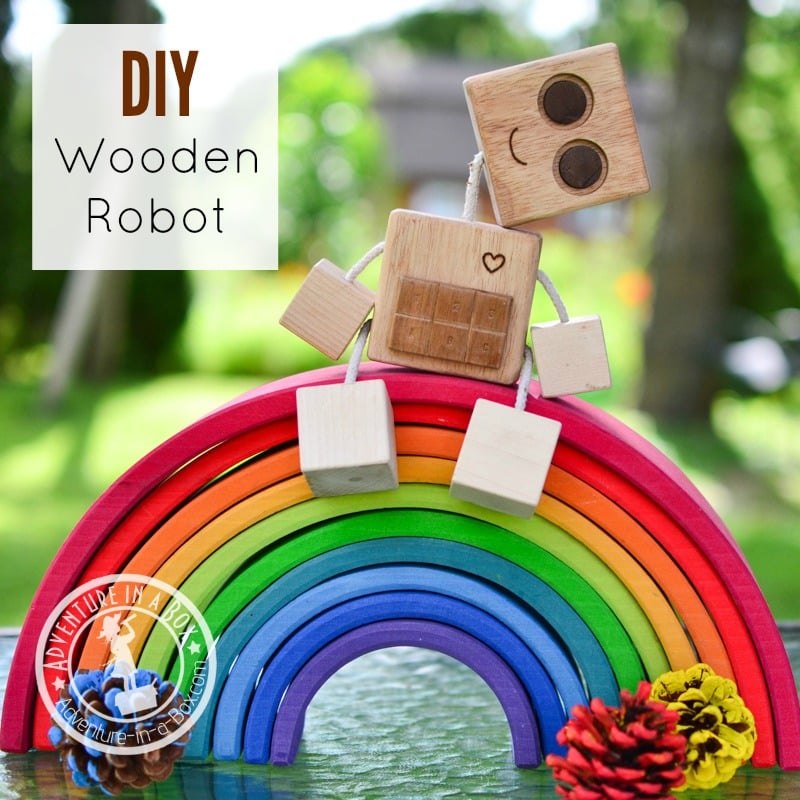